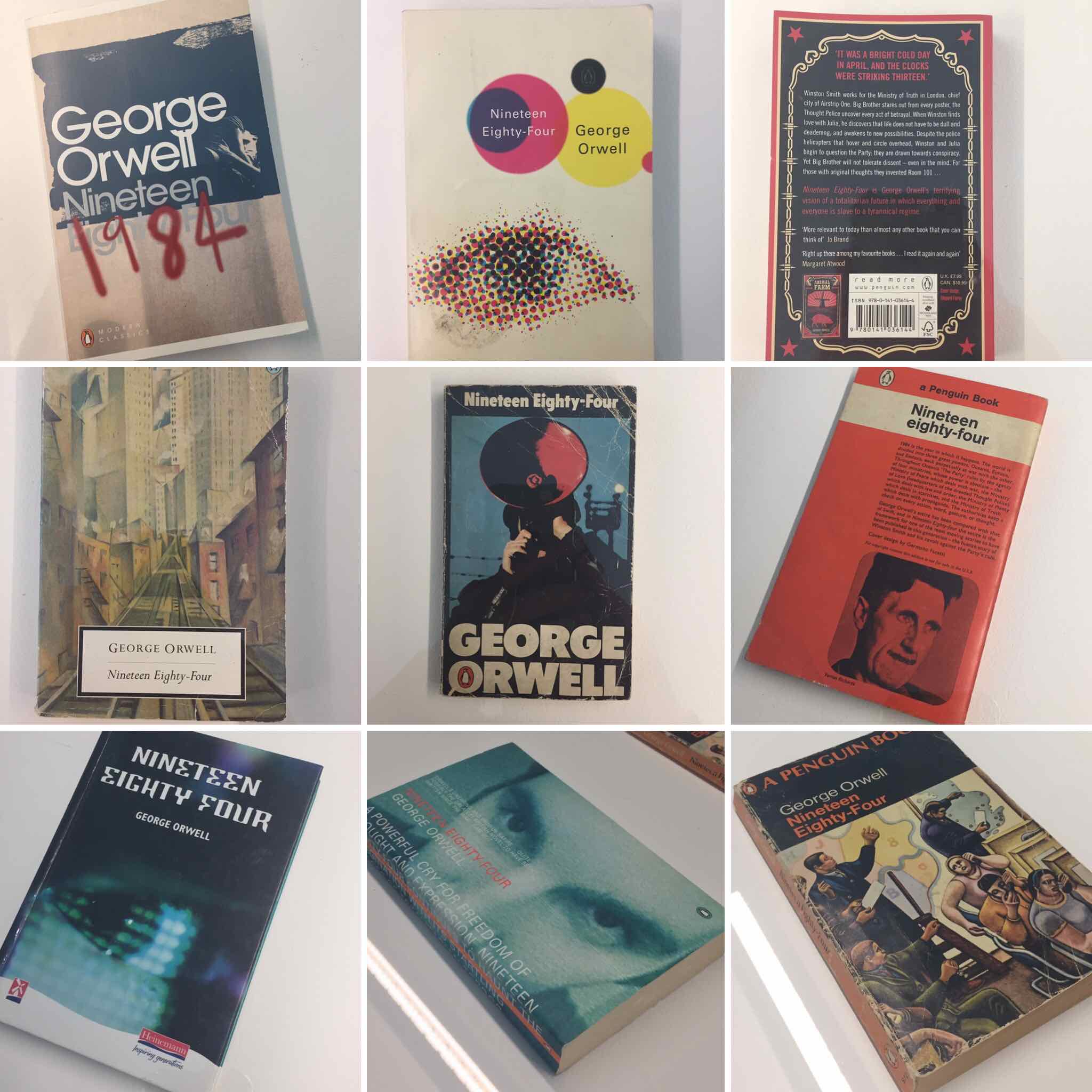 Over the years and as new covers come onto the market of George Orwell’s 1984, I have often wondered about whether the design is affected by the contemporary political climate. Published in 1949 and seen by many as contributing to the death of Orwell in 1950, it is perhaps a story which is resonating at the moment, perhaps more than at any other time in its history.

For me, it has always seemed to occupy that slightly uncomfortable space between possible but unlikely. Or so I had thought, there are many parallels being drawn at the moment with the fragile state of British and American politics. In the last six months we have seen a rise in xenophobia, not just in the psyche of the populous  but creeping (no thundering) into the political mainstream. The West seems to be steering itself into a period of social and political uncertainty, led by a politico of division and isolationist principles.

Are we crashing towards a dystopian future which will be a hybrid of Bladerunner and 1984?

In 2013, David Pearson gained critical acclaim for his series for the reissue of five Orwell covers and most notably for 1984. Its release coincided with a period of British politics that saw a controversial government surveillance policy; nicknamed the Snooper’s Charter, forced through Parliament. It put the British government on shaky ground in respect of civil liberties and the public’s rights to privacy. Pearson draws on the themes within the novel and that reflect this heightened awareness of privacy, censorship and discretion by almost totally obscuring the author and the title, through the use of black foiling. On one level this removal of the most important role of the book cover; by disguising the information, goes against the main function of the cover, which is to inform. However, on another level it celebrates the book as a tactile object; it’s physicality and its materiality. Looking at this photograph, there is no information to read – but if you hold the book in your hand and tilt it and move it around, this information reveals itself. Pearson’s design relies on a physical experience of the book and manipulates the sense of touch; it is possible to feel the type that is debossed into the cover. 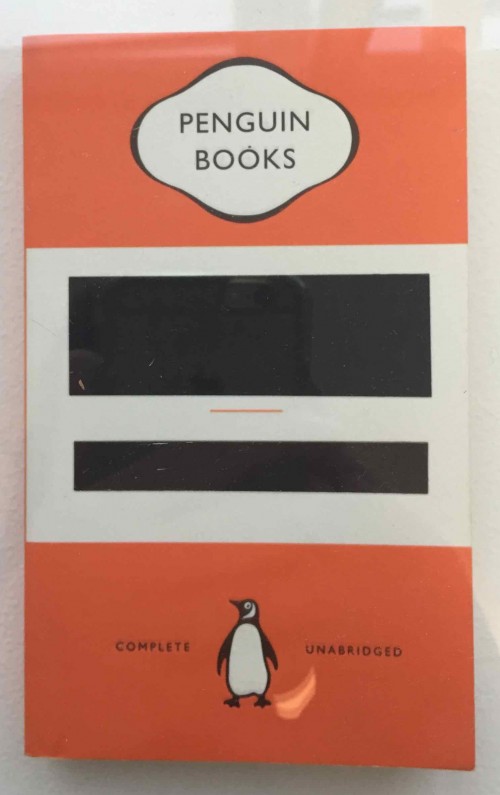 From a design history perspective, Pearson’s cover brings to the modern era, the iconic orange design, synonymous with Penguin designed by Edward Young (1935) and later developed Jan Tschichold (1947), which coincide with the publication of Orwell’s novel. What is interesting about the covers by Pearson and the one seen below from 1951, is that by spelling the date there is an added sense of dread, a severity that doesn’t exist within a numerical presentation. It has been said that Orwell was writing the novel in 1948 and decided to switch the numbers to put distance between what was the point of the publication and the vision of the future. Taking this point further, it is said that Orwell did not intend for this to be read as a prophetic vision of the future, more an exasperation of an economically and socially depressed post-war Britain. 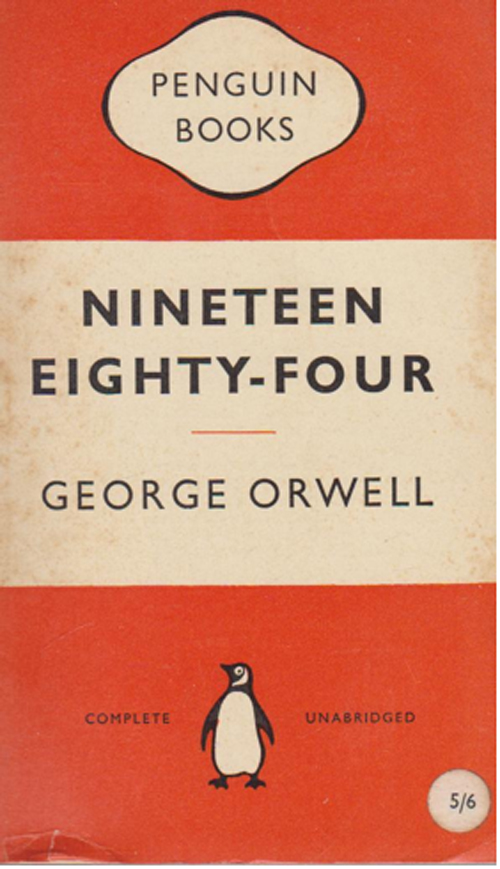 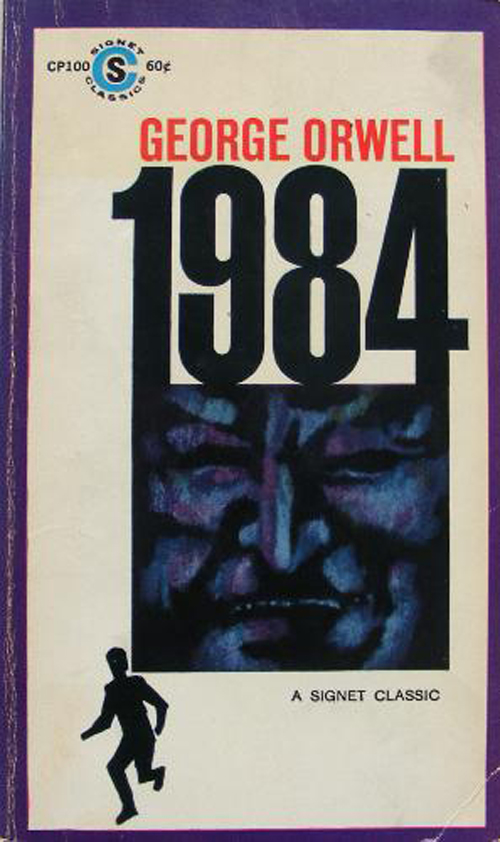 Is it me or does the character in this Signet Classic (USA) cover from 1961, bare a striking resemblance to the newly inaugurated POTUS? This devilish, dark and almost gargoyle representation of the State, appears aggressively and confined through a window on to the world, which the man is failing to escape from. The dark gothic typeface has an industrial and aggressive nature that is being held down by the red (communist, left wing) author. Similarly, the Penguin edition of the same year (pictured below) also has a very sinister and nightmarish quality. Here, we see Penguin retaining the classic orange identity and making use of collage of photography and illustration, framing the cover somewhere between reality and surreality.  Interestingly, Penguin continue to represent the title in text format, rather than numerically. 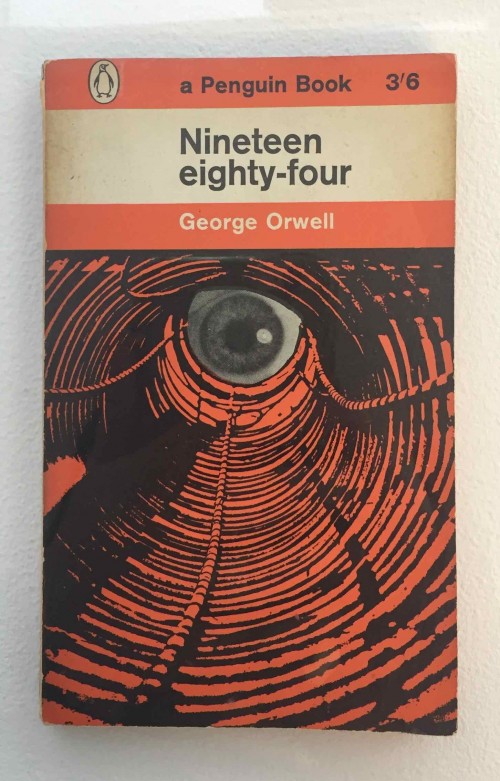 As this novel continues to be reprinted so does the reinterpretation of the novel in visual form. From the use of contemporary artists and illustrators to the embracing of contemporary graphic trends and techniques. Overarching all of the covers is a sense of foreboding, terror and that feeling that you’re being watched from a discreet distance. The visual use of the eye staring in a critical manner, through a hole in the fence, or a crack in the door – or even through a screen – you are being watched and it is not in a supportive manner. 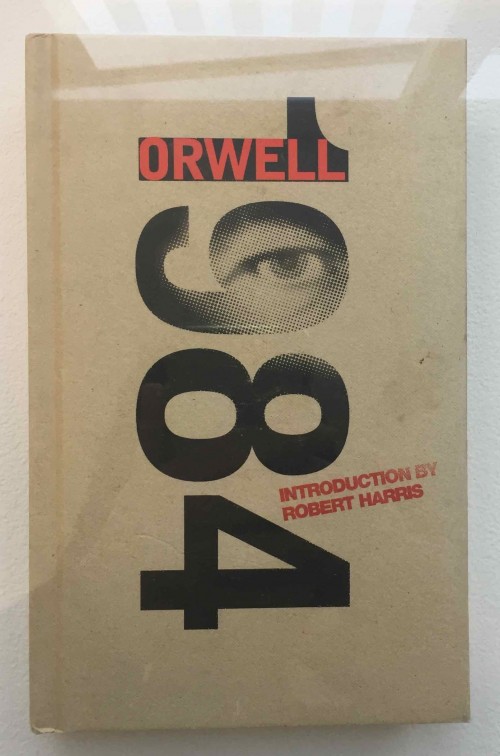 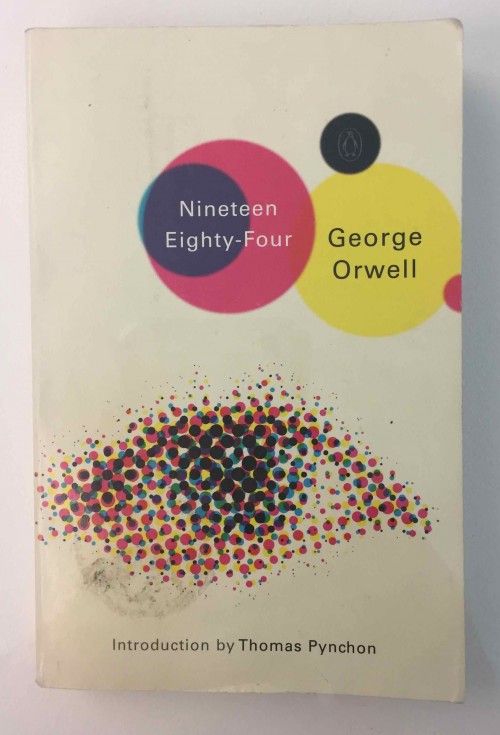 There are so many interpretations of this novel for its cover it is not possible to dissect them all here; countries, languages and spanning decades make for a fascinating study not only into the representation of literature but also as a visual archive of the cultural journey made by graphic design. Whether or not the covers directly reference the current political climate is not clear. However, it is plausible that the interpretation of the novel and where the reader feels it sits in that space between possible but unlikely, is affected by the current political climate. Perhaps at the moment the Orwellian tale of the future is more pertinent than it was perhaps ten years ago, or in some cultures and countries it maintains a much closer relationship with truth. With that in mind, it will be the designer’s relationship, or the view of the publisher at the time, with the political climate that could lead the project forward. David Pearson achieves this through a tasteful and beautiful take on a classic graphic language, it just so happens to possess quite a sinister undertone.

Penguin states that “Nineteen Eighty-Four is George Orwell’s terrifying vision of a totalitarian future in which everything and everyone is slave to a tyrannical regime. The novel also coined many new words and phrases which regular appear in popular culture, such as ‘Big Brother’, ‘thoughtcrime’, ‘doublethink’ and ‘Newspeak’.”