There seems to be a growing trend for design agencies when engaged in rebrand exercises, to strip logos of any ornamentation. Removing and simplifying components to reveal a stark, or refreshingly pure, result – not unlike the notion of natural beauty after the removal of make-up. In the last four years, American megaliths of commerce; Coca-Cola, eBay, Google, Microsoft and now Mastercard have all undergone rebrand exercises that have stripped their logos to reveal, thinner, more measured and quieter logos. Interestingly, this trend seems particularly prevalent in the tech arena.

Are we entering a new age of corporate self-effacement? “Dear customer, We appreciate that we are making millions from you, whilst you struggle to make ends meet in times of austerity, so to reflect our consumer intelligence, we present to you a quieter, more sedate logo that we have paid 100,000s of dollars for. Yours, <insert corporate name of choice>”. There is something to be said for a more austere approach to branding that we have witnessed since the credit crunch of 2008. Perhaps the most notable and one of the first behemoths to undergo a rebrand was the iconic Coca Cola, in 2011 by Turner Duckworth, who stripped the packaging of all the gradients, stripes and anything that was regarded as over-ornamentation and unnecessary decoration. I remember thinking that not only was this a hugely brave moment in design history, but also that it represented a more confident, yet private approach to logo design. Imbuing a sense of, we don’t need to dress up and wear lots of make-up because we are Coca-Cola. 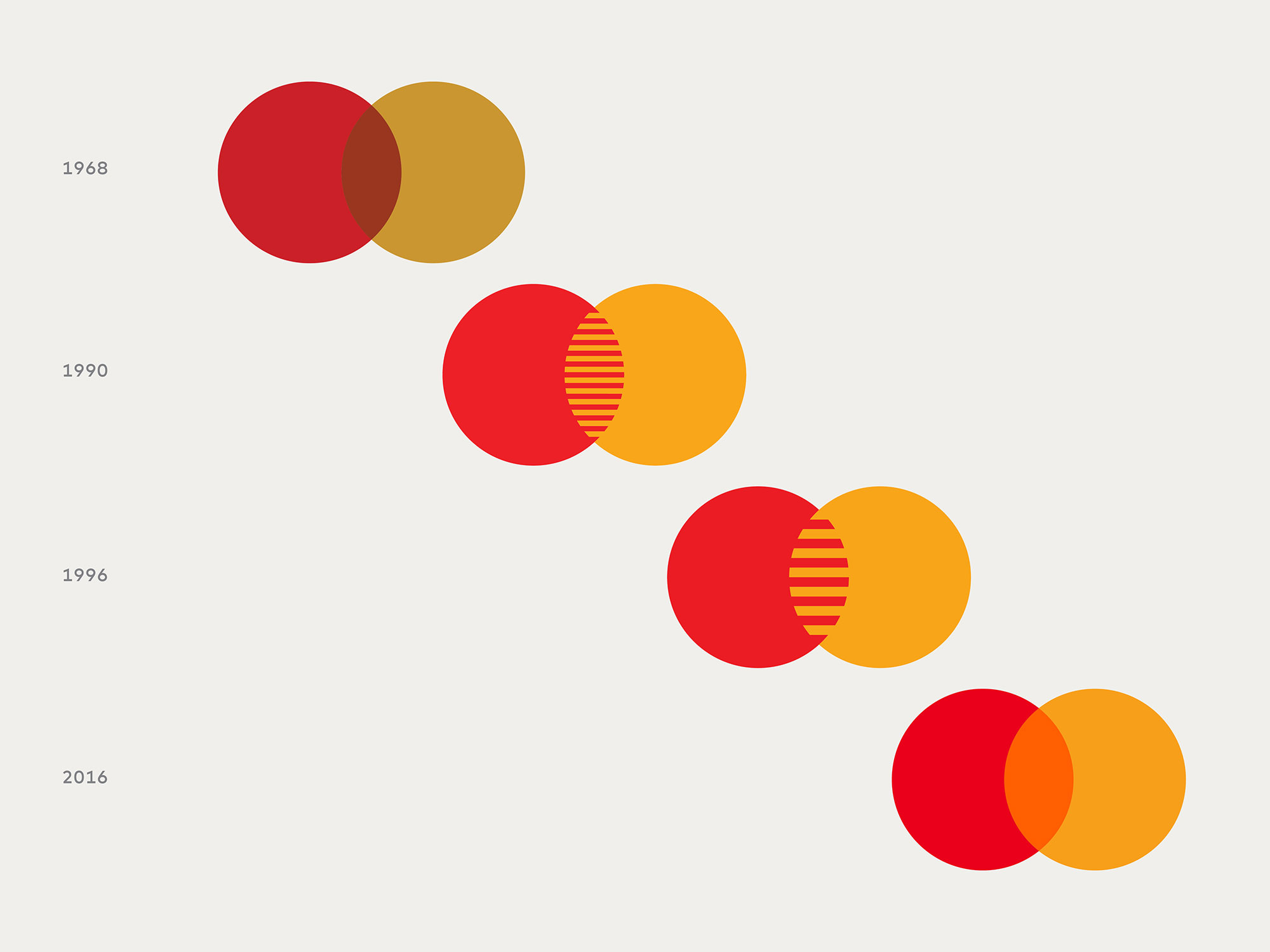 Michael Beirut and Luke Hayman of Pentagram have unveiled their rebrand of Mastercard, which has successfully managed to retain the ubiquity of the logo that has a history of over 50 years and a reach of over 2.5 billion people (mastercard’s card membership). I am reminded of my recent blog post about North’s rebrand of Co-op and I am reflective on the fact that the tone of that post was perhaps one of doubt in the success of the exercise or what it meant to the broader study of branding. Having thought about it a bit more, there seem to me, to be significant differences in the approaches that have led to the reinvigoration of these brands. Rather than turning back the clock and reinstating an historic logo, which is what I feel North did for the C0-op, Beirut and Hayman have returned to the essence of a logo, but brought it into a modern day environment. What is fascinating is both the Co-op logo and Mastercard logo are both referencing original logo designs from 1968, whether this means anything or is just a coincidence has yet to be established. 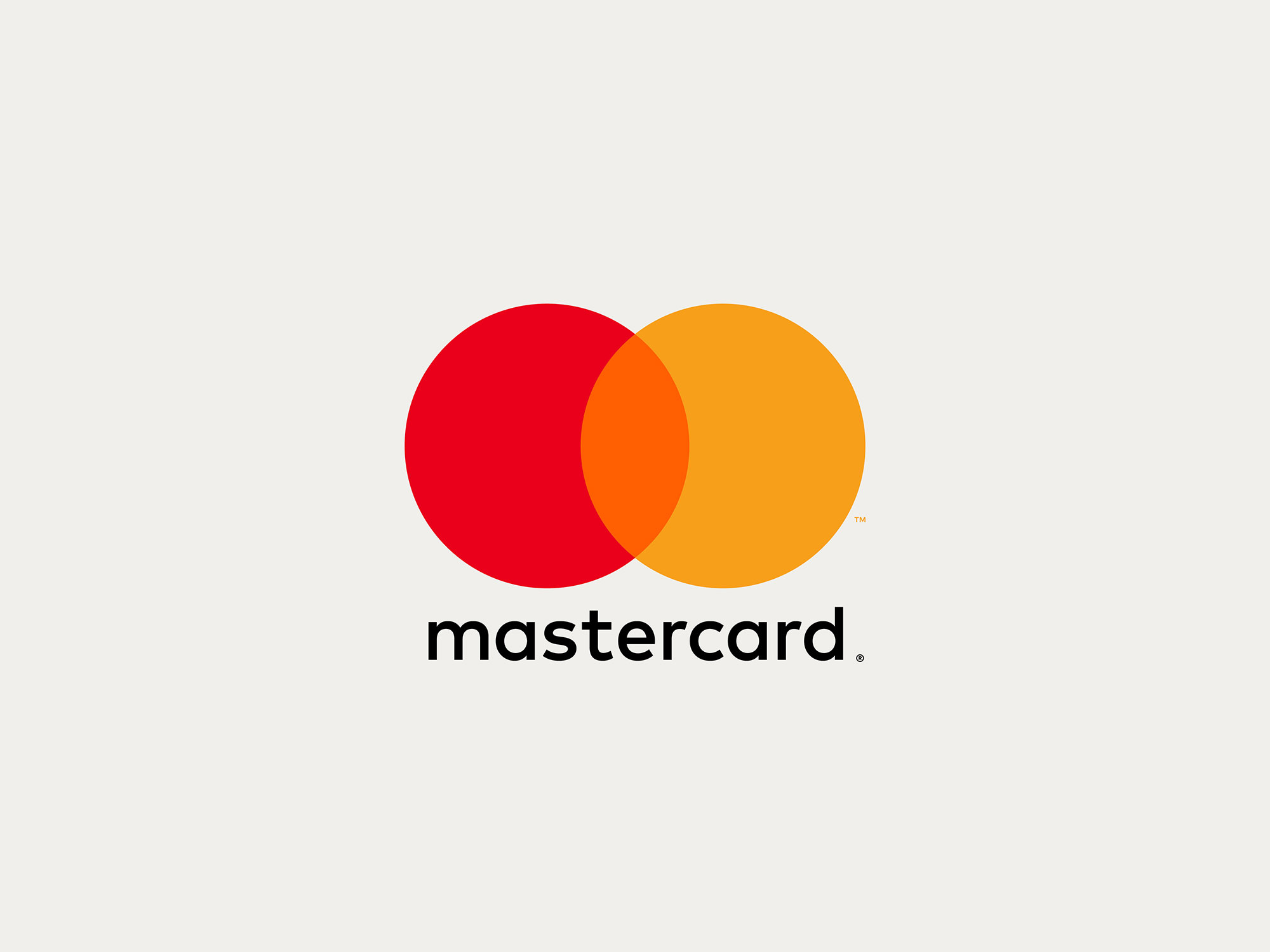 For me, the Mastercard identity exercise is more successful than the Co-op rebrand, as it seems to be more thoughtful. I have a lot of nostalgia tied up in the Co-op rebrand, but it doesn’t feel as brave or as considered – it just taps into the desire for a golden British age, a time before Brexit. What Beirut and his team have successfully achieved is to create a logo which retains the familiarity and pays tribute to heritage of a well known brand. The fact that we can recognise the corporation just through the two interlocking circles is a strong position to be in. Returning to the essence of the 1968 logo but, with greater awareness and sensitivity paid to the variety of applications that the logo will need to appear on – from the billboard to the Apple watch, the logo has to work on a number of mediums and scales. Gone is the “combed” middle section of the circles, evoking a sense of interlocking connectivity, replaced by a beautiful shade of orange that represents transparency in an untrustworthy age of banking. Yet, it also has become a much more “flexible” (a nod to the 80s advertising campaign) identity that Beirut has discussed has to be able to work on diverse applications, in an extensive article with Design Week it becomes clear that Pentagram have been meticulous in their development of a branding system – producing guidelines for just about every corporate eventuality, Beirut states, “We were trying to drive everything relentlessly to the foundation of the mark.” Beirut continues in an article for Creative Review by recognising that this is a huge exercise that will involve many agencies and groups, so instilling and predicting the uses became essential in order to maintain the identity’s intentions. What they have tried to do is make a branding system that leaves no stone unturned, in order to keep the brand cohesive and standardised. This is an exercise in preventative design rather than curative, why problem solve? Surely the best option is to cut the problems off before they arrive?

Story of Books: Developing an identity