What an amazing opportunity to attend a one-day letterpress workshop with one of the true greats of British design. Alan Kitching has become widely credited with the popularity and resurgence of letterpress as a craft and an aesthetic. Having left school at 15, Kitching embarked on a six-year apprenticeship as a jobbing printer in the northeast of England. At 21 years of age, he moved to Watford College of Technology to become a Technician. It was here that he met Anthony Froshaug, who I think is one of Britain’s most important designers but is often overshadowed by the likes of Alan Fletcher, Derek Birdsall and Ken Garland. Kitching worked on his Typography Manual, which he regards partly as a response to Froshaug’s Typographic Norms. By the end of the 1970s, Kitching had begun to carve a place in the canon of British graphic design, working and to later become a partner at Derek Birdsall’s Omnific. Kitching talked about the golden age of the British graphic design scene, when there were only 17 design agencies in London.

In his talk, which was a larger event after the workshop, Kitching talked about a malaise that had set in by the late-80s and a desire to return to his printing roots, so he left Omnific and took the printing press with him. What becomes very clear from listening to Kitching discuss his work is that whilst there was a desire to return to his “roots” and the mechanics of letterpress printing, it was under a different guise. All of the aspects of the letterpress printing process that would have once been considered as faults, were now being explored and that the artisan was becoming the artist. The craft skills that were once a test of technical excellence were now being manipulated to stretch typographic conventions and rules. 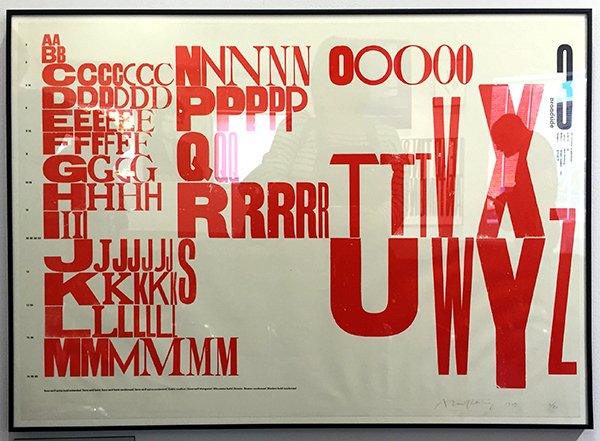 It is not that the Typographic Manual was now irrelevant, more that without this powerful understanding of typographic architecture, the rules cannot be bent and unpacked. To some extent Kitching’s work, is both unique and mass-produced (printing in multiples of 20-25, because the paper comes in packs of 25 and you lose 7 or 8); looking at the layered coloured ink-ups, where the type has several colours in one pressing makes the prints one-offs, but as Kitching says, he is very good at recreating the same ink-ups in the next print. On examination of Kitching’s letterpress works what is most noticeable is his incredible attention to detail and specifically with the relationships of space and type. Kitching’s work demonstrates the ability that only someone who has studied the convention of type design can; it reminds us of the importance of proportional relationships and how type as shape can become type as image. 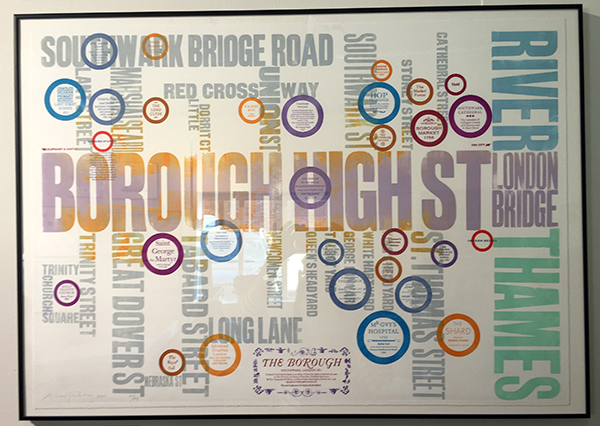 The workshop itself was held at the Lettering and Commemorative Arts Trust, at the Snape Maltings in Suffolk, which is also where the exhibition is held until the 20th August 2016.

A one-day workshop, which I chose to do for two reasons; primarily to spend a day with the prestigious Alan Kitching and second, to sharpen up my craft skills with letterpress – in the vain hope that I will fire up my Adana press in the not to distant future. What I learnt was that after all of his years practicing, Alan Kitching is still passionate about the letterpress process and how the “happy accident” can lead to new aesthetic ideas. He is still very focussed on the idea and the meaning behind a piece of work and the work he produces is a way of expressing his passions outside of the medium. Throughout his work is a clear pattern of typographic rigour, but beyond that his work represents him and it is as if his whole cultural being is represented in the glorious exhibition. There are typographic maps, that reference his affection for both London and Harry Beck, which have been developed from the grey of the pavements to multi-colour representing the diversity of London and then the spread to New York.

Kitching’s love of music and theatre is also very evident in his work; a piece which is particularly successful is the collage of names of musical heroes. The multi-layered poster represents the layers of peeled bill posters and almost ghosting of names over the top of each other gives a sense of historical provenance. Each name set in a different typographic style, indicative of perhaps their character, musicality or even the era. What is also most noticeable is the distinction between first and surname. How wonderful to be instantly recognised by one half of your name! Dylan, Bessie, Ella and Hendrix… 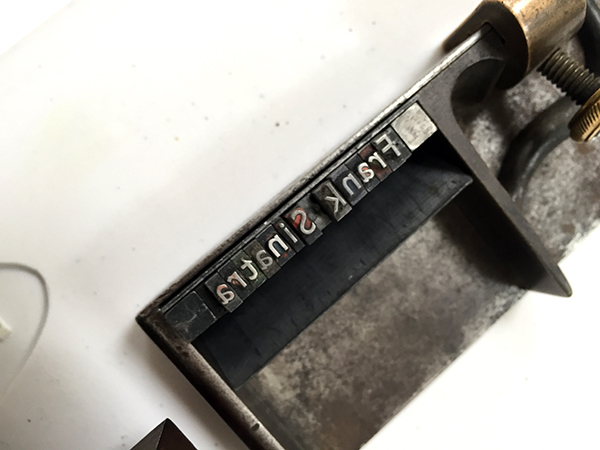 Our brief for the day was simple. We were to select from a list of musicians and produce a monogram from their initials that is representative of them. I chose Frank Sinatra. I took an expanded “S” and an ultra condensed “F” and laid them over the top of each other, to represent the connection of the Mob and the Las Vegas casinos, I wanted to create a dollar sign. 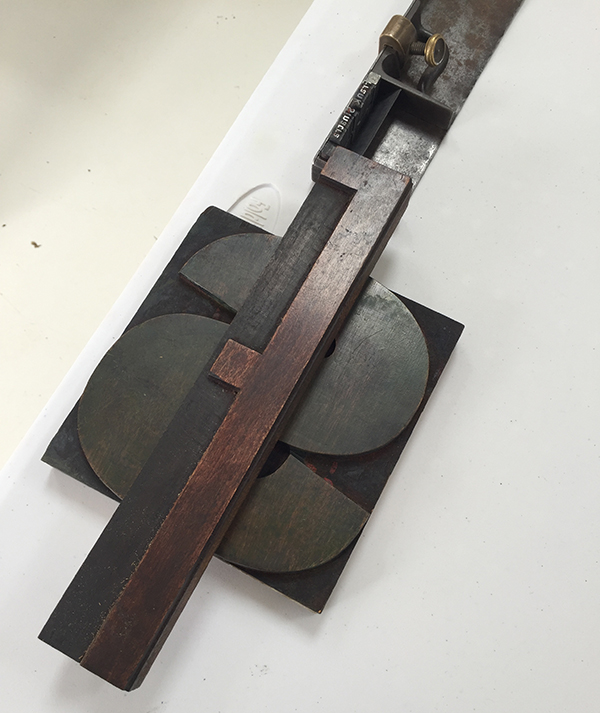 I inked it up in a green and laid the S down first and then inked up a darker green for the F. I was frustrated by the difficulty in getting the perfect level of ink, but the overall result was pleasing. 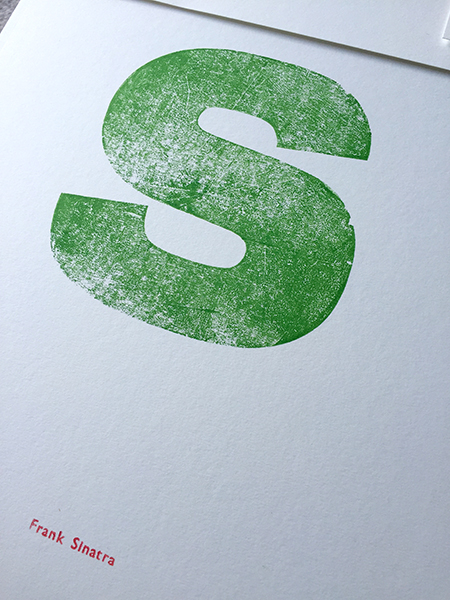 I couldn’t leave the day without getting Alan Kitching to let me photograph the back of his t-shirt, designed by Paul Shaw. This sums him up brilliantly, ideas+humour+type=memorable design. 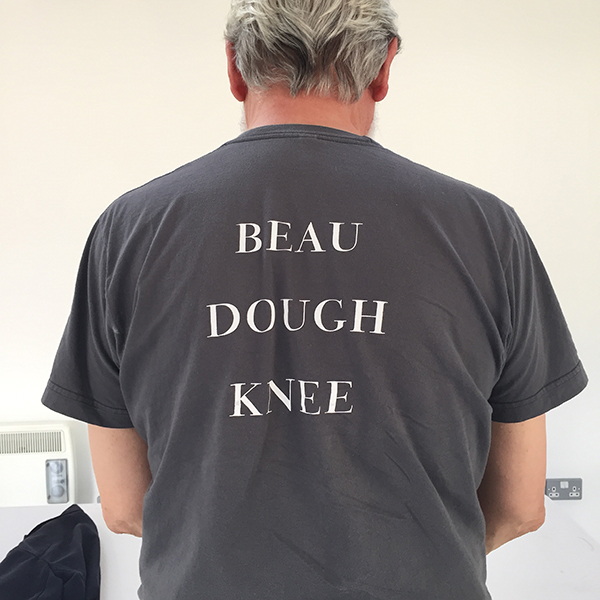 Rockwell, Roosevelt and the Four Freedoms