On Friday, 1st July 2016 I attended a conference arranged by the University of Leeds’ Centre for the Comparative History of Print (CHoP). The one-day conference centred around the notion of the book as a held object and the experience we have when we interact with the book. Several key themes emerged from the conference; the most prevalent being about the book as an object; what is it? And how does the notion of the “haptic” relate to how we understand the book? Tim Mosely from the Griffith Centre for Creative Arts in the Queensland College of Art in Australia, discussed the role of the haptic in our understanding of the book as an object. He reminds us that the haptic assists us in our understanding of objects through our sense of touch: “The haptic does not arrive at a conclusion, rather it dynamically informs a relationship between the object and subject”. In other words, our sense of touch informs how we feel about the book as an object and that the materiality of the book has been developed by our hands, for our hands.

Looking back at this conference, what I am struck by is how book has maintained its position as an iconic cultural marker and not just in modern western culture, but through Islamic history and other far corners of the world. The book, whether a religious text, a historical document or a revered artists’ book is an object which commands both adoration and respect and is also fetishized. Whether a curated object in a modern home, or one of the earliest Bibles placed at the alter of the village church in the 18th century, the book is often placed on a pedestal for people to admire.

Conversely Anna Reynolds, University of York delivered a paper which discussed the changing structure of the book and that of the book as a waste product; the book that is re-appropriated for a new function. The British motorway, M6, famously made use of old Mills and Boon romantic novels to form part of its construction process, (about 45,000 books were used per mile of motorway). Reynolds’ presentation explored the history of waste paper in early Modern England, looking at how pages were removed from books to perform new functions, like lining boxes and as a wrapping for food. 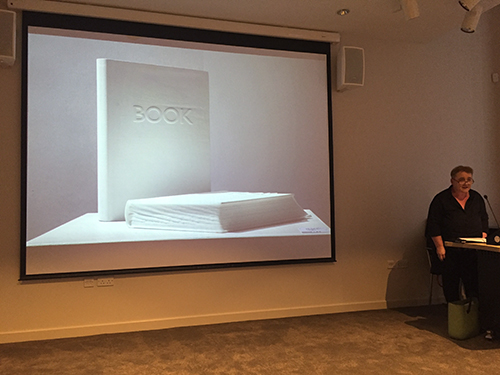 The keynote lecture was by Sheena Calvert, who took a much more philosophical approach to the book as an object, by first questioning; what is a book? Going further into the philosophy surrounding that question, if we accept that a book is a thing, we then must question what is meant by thingliness?  What Calvert demonstrated through her paper was the idea that the book, as a thing, is a technology. Not in the sense that it is a technological object, but more that the book is a framework for a way of being. Calvert’s creative practice, just as with her theoretical study, forces us to question the idea of the book as not just an object, but also as a cultural icon.

Through her creative output, Calvert challenges the physical representation of the book. The two examples that she presented were a 3D printed book object, with the title “Book” imprinted on its cover, which both communicates the object’s function but also tells us nothing of its content. Interestingly, the 3D printer was unable to print the edges of the pages and caused the printer to break. The second book object, titled, “The cruelty of the classical canon”, is a 35kg book with a cover made from 130 year old piece of steel. These two objects use polarised ends of technology in their production; the 3D printer right at the forefront of technology and the artisanal blacksmith process which dates back centuries. However, they share common ground in that neither can be opened – one is a solid object and the other is so heavy that opening and interacting it with it is nigh on impossible. Herein lies the next contradiction of the object’s relationship with their perceived function, neither book has any content, which leads us to question, what is the meaning of a book without content. What continues to interest me, is the notion that the visual language and physical appearance of the book is still so embedded in our conditioning that there is no question that these are anything other than books. Their material qualities and the visual appearance tell us that they are books, yet they are devoid of content. But, not devoid of meaning.